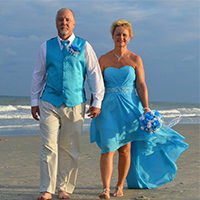 I went through a lot of pain and heartache as a child. I had an abusive childhood, an alcoholic dad, I lost my brother when he was just 15, plus I was raised in a Baptist children's home for my teenage years.

I was married at 19, pregnant at 20, had my first child at 21, was divorced by 24, and then married again at 27 with two stepchildren. My second husband and I had a child together, a son, before I was 30.

Of course, as my life goes, the marriage was verbally abusive and extremely stressful. I had always had IBS and was depressed. I cried a lot when my husband yelled at me.

Then I started having problems sleeping at night, and after three years and muscle spasms in my neck, was diagnosed with fibromyalgia. I had never heard of fibromyalgia in my life and wished that I never had. Of course my husband didn't believe anything was wrong. He said it was all in my head and I actually started to believe it.

My son Brandon and my daughter Shannon were my life, and I felt like I had failed them. I mean, who was I to drag them through all of this? After 13 years of cussing, yelling and screaming, and watching my son slowly start to mimic his father, I had to walk away.

I bought a house and some land and had a good job with a good boss, but still had problems sleeping and the pain became worse. In February of 2002, I had a major car accident and was thrown from the car. The car rolled over my hip as I was thrown from the car. When I hit the ground and I felt the thump, I started to give up – I really didn't want to be here anymore. One woman at the scene started praying for me.

After I was told I had no broken bones, just bruises, and was checked out of the hospital, I broke down and cried because of the thoughts that had gone through my head. I had two beautiful children who had gone through enough and that loved me. How selfish was I to think only of myself – so I picked myself back up.

After a few months I was in college doing a paper on fibromyalgia and came across a doctor in California who had awesome responses from patients with FM, so I went to see him. He placed me on Neurontin three times a day and I saw great results, but after another bad relationship and a lot of horrible heartache, my pain started getting bad in my lower back and buttock area – I could barely sit without extreme pain.

I had been through a lot after the accident, but after another divorce, I met my husband Marty through Match.com. He had two beautiful girls, who of course scared me at first because of my past and other stepchildren, but I made the decision to tell their father right from the start that I wanted to be “the good guy” this time. He agreed that he would always do the discipline and I would be the friend. I lost my home and his girls told me to move in with them, and even through I was scared I did because I knew the girls and Marty loved me. He has always been there for me and tried to understand my pain that hadn't gotten any better.

We had been together for three years when my son was going through a lot of problems in his life and we asked him to come live with us for a while to get back on his feet. He was humiliated by this, because he had always been so independent. He was in the Army National Guard for going on six and a half years, had one son with another on the way, and he was only 23 years old. Until that time he had always been so strong, but he was at the lowest point in his life. He had been with us for only a few months, two weeks after his 23rd birthday, when I found my son dead in our home. Someone had given him some pain meds to dull his pain, and it was too much for his heart. He died in his sleep.

This was when I found out just how strong I was, because I have lost a brother, but losing a child is much different. I was his best friend and to know that he couldn't tell me just how close he was to this was even more painful. Watching his little son try to understand and knowing that his youngest son will never even know his daddy crushed me inside.

I had never heard of fibromyalgia in my life and wished that I never had.

My husband Marty has been the one there for me the most. He has always understood, and one month after the loss of my son Marty asked me to be his wife. As scared as I was to be married again, my love for him was stronger. I have been through medications galore, but he has been my biggest relief of all. I am in pain every day and at times I do break down in tears, but he has always been that shoulder for me.

I always get up and go to work every day, driving almost an hour, because I won't give up. I do house work, cook, clean, do laundry and spend time with my grandchildren, even though I know it will hurt more afterwards. This is life and I know I am just going to have to live with it and I won't give up. If I don't get up and go on with these things in my life, emotionally and physically I feel worse. I don't want to sit back and watch the world go by and not be a part of it.

I am proud of my two children Shannon and Brandon, they have given me a true reason to keep going, as have my three beautiful grandchildren, Chloe, 12, Cameron, 5, and Ethan, 2. My son has left me two beautiful gifts, who will always carry wonderful memories of my son. I may never be without pain, but I also will never be without love.

Don't give up. Don't sit back and watch the world just pass you by. You may have a disability, but you are still alive. Be a great influence for the ones who are giving up, who need to know that you don't have to give up. My pain meds take the edge off enough for me to still be there for others. My husband, children, grandchildren and stepchildren need me and by going on I give them back what they have given to me: love.

I had two beautiful children who had gone through enough and that loved me. 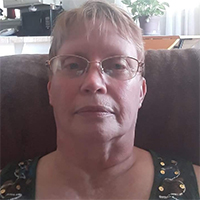