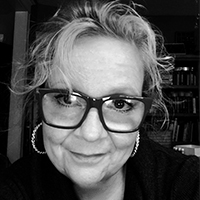 I am a native Minnesotan. I majored in social work and criminal justice. I moved to Seattle, Washington and began working as a director of a work release.

One beautiful, sunny afternoon in August of 1998 I was a passenger in a car accident. I was in extreme pain after the accident but continued to work.

I was tested for everything and all tests came back negative. No one could tell me why I could not get better!

My acute pain diagnosis was now my chronic pain diagnosis. I was heavily medicated just so I could make it through a workday. Finally my doctor said to me, "It is your health or your job."

I picked the latter! I did not get my way. I was medically removed from my job in 2001.

The pain was so bad I moved back to Minnesota and lived with my parents. They cared for me for almost two years. It was during that time my mom brought me to see a small town doctor in Sauk Centre, Minnesota.

He did what I later learned was a trigger point test. He announced I had fibromyalgia syndrome. I had what? I had never heard of this!

What was fibromyalgia syndrome? I started researching. Every book, magazine, or newsletter out there I found and I read.

There wasn’t much information to find, but I learned in 2002 that fibromyalgia was called the "garbage can disease." I immediately went into hiding, pleading with my parents to not tell anyone what I had been diagnosed with.

Now, in 2016, I no longer hide my diagnosis. Getting to share my story is a welcomed privilege. I do not have a "garbage can disease" — I have fibromyalgia syndrome.

Being told I could no longer work, that was a very difficult for me. I was angry about that for a long time. I was career-minded and had no idea what to do without a job.

I tried going back to school, but I could not keep up mentally or physically. I wasn't a craft person; I was too impatient! I didn't sew or knit or crochet.

I felt worthless and was still so angry. Finally I knew I needed to stop being angry and accept this fibromyalgia syndrome diagnosis.

I didn't ask for this, I didn't want it, but it was now mine. I had to grieve for a while, saying goodbye to the old me. I had no idea who this new person was going to be, but I welcomed her eventually.

In the beginning, my immediate family rallied around me. But after a few years, they grew very tired of hearing about the aches and pains of my fibromyalgia.

There were a lot of hurt feelings when I missed family events. I was now believed to be unreliable when it was my health, not me, that was unreliable.

I don't blame my family for not wanting to hear about my health. I let go of that. I just don't talk to my immediate family about my fibromyalgia anymore.

My husband, Jeff, is very supportive of my condition. He says it is because we have known each other since childhood. He says he knows how I was raised, what I was like in school and the working world. I was a go-getter.

He doesn't understand why anyone would ever believe I would cancel on a family event for any other reason than a painful health issue. He knows I would never pretend to hurt, want to miss things and not work.

My very best friend, Holly, has never doubted me. She has always been my touchstone! She still lives in Washington, but we talk on the phone weekly. That has made dealing with this syndrome much easier. I get a taste of being on the social scene when I talk to my friend Holly on the phone!

My husband's side of the family has never really had an opinion about my fibromyalgia diagnosis. I believe it is because my mother-in-law has pain issues and they grew up watching their mom in pain. As for any other friends? They simply disappeared.

In order to start getting involved in life again, I had to accept my diagnosis. I had to let go of my anger. I had to stop looking for approval from others.

The day I quit fighting all the "stuff" out there, I was able to focus on improving my quality of life. It took many years, but I am finally here!

You have a real condition called fibromyalgia. Everyone experiences this syndrome differently. Different things work for different people. You must do what works for you.

Give yourself time. Give yourself a break! This is a very debilitating syndrome, especially until you learn how to best manage it and are medicated appropriately.

Even after these things are put in to practice, you will not always win! I've had fibromyalgia for 18 years and I still struggle at times to accept this. I wish you the very best of luck for the future and patience on your journey.

Now I no longer hide my diagnosis. Getting to share my story is a welcomed privilege.

I live in Minneapolis, Minnesota with my husband Jeff and our dog Dora. I enjoy DIY crafts, drawing Zentangles and walking my dog.

Recently I have become more involved in raising awareness for fibromyalgia. A friend and I have also started a Facebook page called Kim and Karen's Fibromyalgia Talk. This page is for those who have fibromyalgia and for their friends and family.